Before there was Chris Sharma, there was Wolfgang Güllich. Wolfgang, like Sharma now, redefined the boundaries of rock climbing, pushing grades into the atmospheric realms with his ascent of Action Directe in 1991at Waldkopf in Germany’s Frankenjura area. Action Directe, the world’s first route graded 9a or 5.14d, even still has seen few ascents. It’s hard to know what Wolfgang Güllich, born in 1960, would have accomplished if his life had not been cut short by a car accident in 1992.

Güllich loved climbing and traveling to new areas. He began climbing on the sandstone cliffs at Germany’s Südpfalz region and by the early 1980s began regularly climbing in the United States, which was still the world’s center for hard free climbing. On his first US trip in 1982, Wolfgang knocked off the coveted 2nd ascent of Grand Illusion (5.13c) near Lake Tahoe, the 2nd ascent ofEquinox (5.12d) at Joshua Tree, andCosmic Debris (5.13a) in Yosemite.

On a 1986 trip to Yosemite Valley, Güllich’s goal was to make a free-solo ascent, that is one without the safety of a rope, of Separate Reality (5.12a), an airy crack climb out a horizontal 20-foot roof perched hundreds of feet above the cliff-base. On an October morning, after already climbing the route several times, Wolfgang felt ready to solo it. He grabbed his friend, photographer Heinz Zak, and headed down the Valley to the route. He effortlessly climbed the route, then sat in the sun on the cliff-top above. He then realized, he later wrote, “It is the thought of death that teaches us to value life.”

The following quote, written by Güllich in 1987, is recounted in the book Wolfgang Güllich: A Life in the Vertical by Tilman Hepp and published in 1994 after his death. It is about Wolfgang’s mental and physical preparation to climb Separate Reality.

"There are only a few more moves left to the obvious holds where the roof starts and the world turns horizontal; these holds are the last position of safety. Then I will move into the ‘other reality.’ Separate Reality free solo—out onto the edge of the roof and over it—is what I want to do! The crippling fear that made my every move freeze at the very thought and left my hands damp with sweat is gone.

“Finally I have all the information I can get about the route. I know every detail, know how much strength it is going to require…. I have already done the route with a rope several times without mistake. But having to do everything perfectly can cause you to freeze up, to obstruct the precision of your climbing, to prevent you moving economically. What would that mean? Maybe somewhere out there on the roof the vicious circle of panic would start and you would be left to shrivel up with your hands locked in the crack.”

Wolfgang Güllich stands as a legend amongst rock climbers, even to those to whom the danger of the sport is accepted as a part of their existence. His ability to go beyond the barriers, both literal and figurative, that block others, lends to his short life a luminosity that sets it apart. In scaling the sheer vertical slopes of Europe, Australia, the Americas, and Asia, Güllich also ascended the ranks of the climbing community, to become one of the greatest ever exponents of the sport.

Güllich greatest legacy lies in the hundreds of routes he opened. Other could follow in his footsteps, and see what he had seen, but Güllich was first. He was not driven by the desire to be first however, but the challenge of unconquered rock:

'If you want to explain the fascination of sport climbing, it is not sufficient to refer to the conservative view of sport that describes it purely in terms of athletic performance as an isolated phenomenon. Rather, the particular value in climbing is the adventure aspect and the life style. The first principle is non-alienated performance: the climber himself decides the hows, whens and wheres of his activity. The only accepted limitation is the rule that determines the ways and means of athletic performance, decided by the participant. To want to do something under your own steam means that you strictly reject the use of aid to move forward.

As Güllich gained in skill it was the free solo that became a greater and greater part of the climbing experience. With the strength of muscle and sinew and mind all that supported his life above hundred foot drops, Güllich eschewed the use of rope and harness, and carried bolts only to mark the route for others. Güllich described the free solo as entering 'another reality in free climbing.'

'An incredible feeling of joy melts all the tension and I suddenly have the impression that it was not a game of gambling with my life; it was not subjectively dangerous. I sit in the sun on the flat summit plateau - the 'other reality' is now part of the past. It is the thought of death that teaches us to value life.' - after his first free solo - 'Separate Reality', Yosemite Valley, 1986.

Wolfgang Güllich (24 October 1960 - 31 August 1992), was born in Ludwigshafen,Germany. He is widely regarded as one of the most skilful, daring and popular rock-climbers of all time.

He first started climbing on the Sandstone-rocks of the 'Südpfalz'. Soon he became one of the best climbers in this region and made the first free ascent of 'Jubilaumsriss VII-' at the age of 16. He traveled to the Elbsandsteingebirge, and to the Shawangunks and Yosemite Valley, US, where he could climb most of the top routes of each area, including a 2nd ascent ofGrand Illusion, 5.13b/c (FA by Toni Yaniro). Later he moved to the Frankenjura and created a great number of hard climbing routes such as:

Thus Güllich added several grades to the grading system. In fact, with the exception of Ben Moon's Hubble (the world's first 8c+), Wolfgang was responsible for 4 consecutive step-ups with the world's first 8b (Kanal Im Rücken , 1984), 8b+ (Punks In The Gym, Apr 1985), 8c (Wall street, 1987), and 9a (Action Directe, Aug 1991). Güllich also invented the modern training technique of campus boarding in order to climb Action Directe.

He was also responsible for first ascents of routes like 'Eternal Flame (IX- A2)' in the Karakoram and 'Riders on the Storm (IX A3)' in Patagonia. The boldness of these routes showed that he excelled at difficult mountain routes as well as one-pitch sports climbs.

He broke his back falling off the Master's Edge at Millstone Quarry in Derbyshire, England but when he recovered climbed Separate Reality in Yosemite National Park, USA (1986). Climbing without a rope, he negotiated a twenty foot horizontal crack in an overhanging roof.

He was also a climbing double for "Sylvester Stallone" in the movie Cliffhanger.

In 1990 he became acquainted with Anette, whom he married one year later. On August 29, 1992 Wolfgang's car veered off the Autobahn between Munich and Nuremberg after he fell asleep while driving. Two days later he died in a hospital in Ingolstadt, never having regained consciousness. His media commitments due to his burgeoning popularity following his work on Cliffhanger have been cited as reasons for his extreme fatigue at the time.

Well over a decade later, he remains one of the greatest idols for climbers all over the world, not only for the impressiveness of his new (and hard) sport routes, but also for his generosity and humility as a man. His death at age 31 is widely regarded as one of the great tragedies of modern rock climbing. 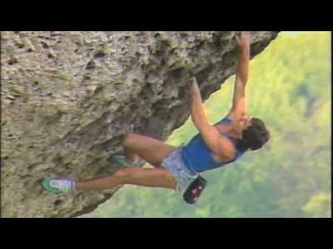 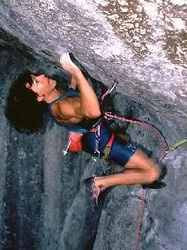 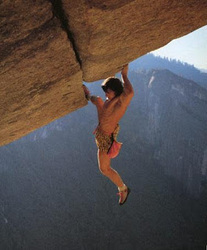 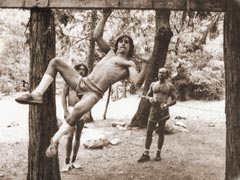 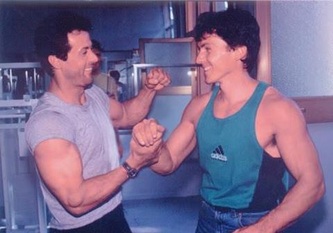 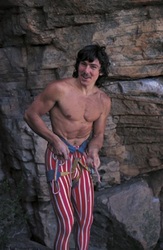 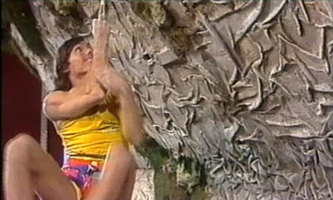 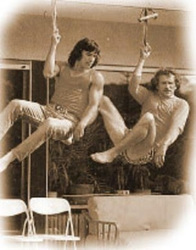 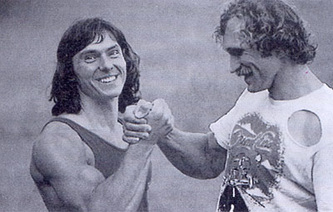 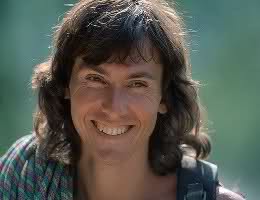 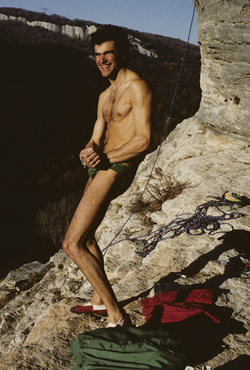 pics: even if Jerry Moffatt did the hardest routes during the 80s most guys would rather have Wolfgang Gullich and Kurt Albert’s arms, and they weren’t too far behind.